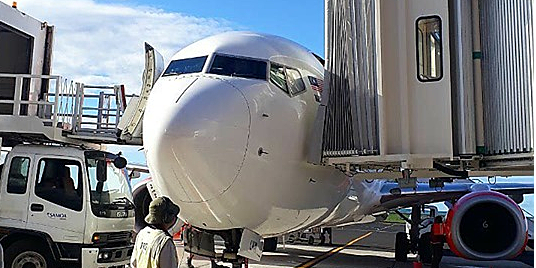 One of the new aerobridges installed at the Faleolo International Airport was put to use for the first time yesterday, marking a new chapter in Samoa’s aviation history.

Samoa Airways posted a picture on its Facebook page, of one of the newly installed aerobridges being used for the first time on its leased aircraft that just arrived from Auckland, New Zealand.

“A historic moment took place today at Faleolo International Airport when one of the newly installed aerobridges was used for the first time. Seen here is our flight OL732 from Auckland at the gate with the bridge on approach, ready to be used by disembarking passengers,” the airline’s social media post stated.

Work on installing the aerobridges began in January this year with the Samoa Airport Authority overseeing the installation.

Samoans have welcomed the new development with the airline’s Facebook post having close to 250 shares and attracting close to 200 comments.

A woman Ana Clulee, who commented on the airline’s post, said passengers with mobility challenges will benefit from the new facility.

“Yippee!..it will be more comfortable and easier, especially with people with poor mobility and the whole community of visitors to Samoa,” she said.

Another woman, Rosa Tualogo, described the commissioning of the aerobridge as “good progress” and congratulated Prime Minister Tuilaepa Dr. Sa'ilele Malielegaoi and the people of Samoa.

“Good progress...but I'm gonna miss that heat which hits us when we step out of the plane credits to Mr Prime Minister and people of Samoa.”