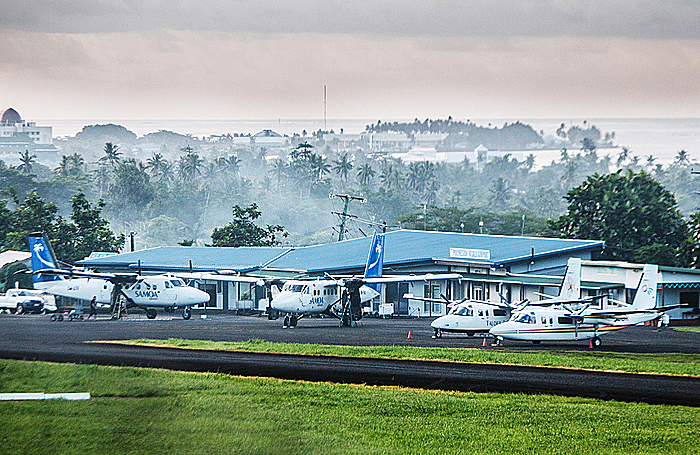 The Fagali’i Airport will be handed over to the Samoa Airport Authority (S.A.A.) to operate.

It is currently owned and run by the Polynesian Airlines (Investment).

But the Minister of Works, Transport and Infrastructure, Papali’i Niko Lee Hang, said the Government has finalised the decision for the airport’s handover.

“The Government believes that a private airline company should not run the airport, because other (aviation) companies are also using it which is a conflict of interest for them."

“So the decision to return it to Airport Authority is because it would be more secure, as they have fire trucks in case of any emergency, and at the moment Polynesian doesn’t have those vehicles for emergency."

“If something does happen they don’t have fire trucks, only the Airport Authority does, and also in terms of terrorist coming in – we need authority to manage those operations, and especially it is an international airport and needs to stick to international laws,” he told the Sunday Samoan.

The Polynesian Airline has been given 16 months to make the appropriate preparations for the airport to be handed over to the authority.

The return of Fagali’i to the authority will mean it will have full control of all airports including the new Ti’avea airport currently being built.

When he was asked what will happen to Fagali’i when Ti’avea airport is in operation, Papali’i said it will stay open. Ti’avea airport will be on standby for incoming flights.

“The idea is if its cheaper to operate, the one at Ti’avea then we will run it and have just the last flights coming in to Fagali’i. The airport at Ti’avea is to avoid incident like the plane that crashed at Moamoa in the past. If the weather is bad, then the flights can use there than flying all the way to Fagali’i.”

On the question of affordability by the Government to simultaneously operate three airports, the Minister was optimistic saying we will have to wait and see.

Papali’i said the airport will be much bigger than the one at Fagali’i, which has a runway of just 700 meters, and is expected to be in operation by November this year.

When the Minister was asked how the Ti’avea airport will be funded, Papali’i pointed out it will come from funds put aside for capital use development.

“It is funded under main budget. The money will come straight from the Faleolo landing fees, parking fees and rents from businesses and companies at the airport.”

The Minister – who is also responsible for the Samoa Shipping Corporation that owns the Satitoa wharf – said he is aware of public concerns at projects where a lot of funding is poured into and had poor returns.

On Satitoa wharf, Papali’i said the corporation tried its best to generate revenue from the wharf but did not make profit. (The end of the day vaai atu le corporation e gau)

He blamed the cost of transporting people back to Apia and businesses’ preference for easy pickup in town for the corporation’s bad performance.

“There was a risk of people that wanted to go Savai’i or overseas and weighed all the options and the boats benefit when it is docked here (at Matautu). If it docks at Aleipata the people had to go all the way to Aleipata do pick up and same with taro sellers so the disadvantage is bigger than the advantage. The only advantage was that it is the shorter time of sailing (from Am. Samoa to Upolu).”

The Minister was also asked if he was concerned at Ti’avea facing similar problems to Satitoa airport due to its distance from town.

In response, Papali’i said the project is a trial and the Government will have Plan B if things don’t work out.

“Things like this I believe are all challenges that Government leaders go through. It is to be there for an emergency, but that is the concern of the public, because of these big developments it might be abandoned and that is all our concern as taxpayers and the Government does try to do what is best for people."

“If it doesn’t work then we can have something else planned there but the idea is to have another development out there near the rural villages on that side of the island.”